In Year 7 Latin we use the Imperium course to follow the story of Hadrian, future emperor of the known world, learning about his childhood and his move from his birthplace of Spain to the biggest city of all: Rome. 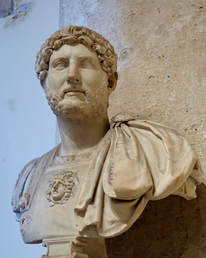 Hadrian, from the Capitoline Museum, Rome.
Here's Hadrian, on the left. He was born and raised in Italica, a town in Spain, with his elder sister Domitia Paulina.
To learn a little bit more about Roman daily life, click here.

Hadrian's father was Publius Aelius Hadrianus Afer, (we call him Afer) - he was a high ranking senator who would have spent much of his time in Rome. Hadrian's mother was Paulina, daughter of a distinguished Spanish-Roman senatorial family from Gades (Cádiz). To learn more about women in Roman society, click here.

In 86, when Hadrian was just ten years old, his parents died, and he was adopted by his father's cousin, Trajan. Like Afer, Trajan was another powerful politician in Rome at the time. To learn more about Roman politicians, click here.

​Hadrian was physically active, and enjoyed hunting; when he was 14, Trajan called him to Rome and arranged his further schooling in subjects appropriate to a young Roman aristocrat. Hadrian proved so fond of Greek literature that he was nicknamed Graeculus ("Greekling", or "Little Greek").

The Romans were crazy about Greek stories and myths (can you blame them?). Click here for some information about the gods the Romans loved so much they adopted them as their own.
Powered by